The London Broker is pleased to bring to market this excellent three-bedroom, mid-terraced Victorian home with a south facing garden set in one of the most sought-after streets in Streatham Common. 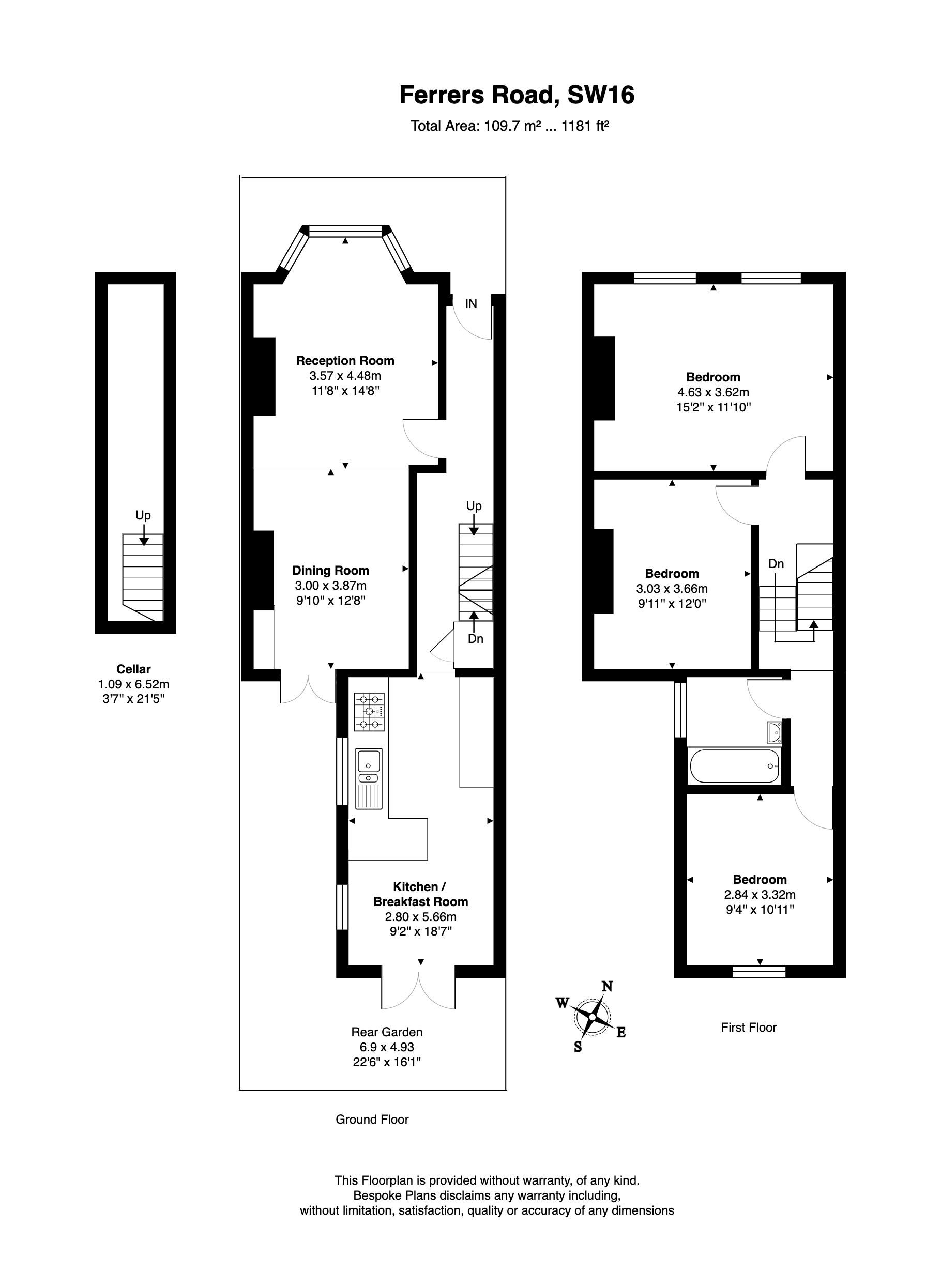 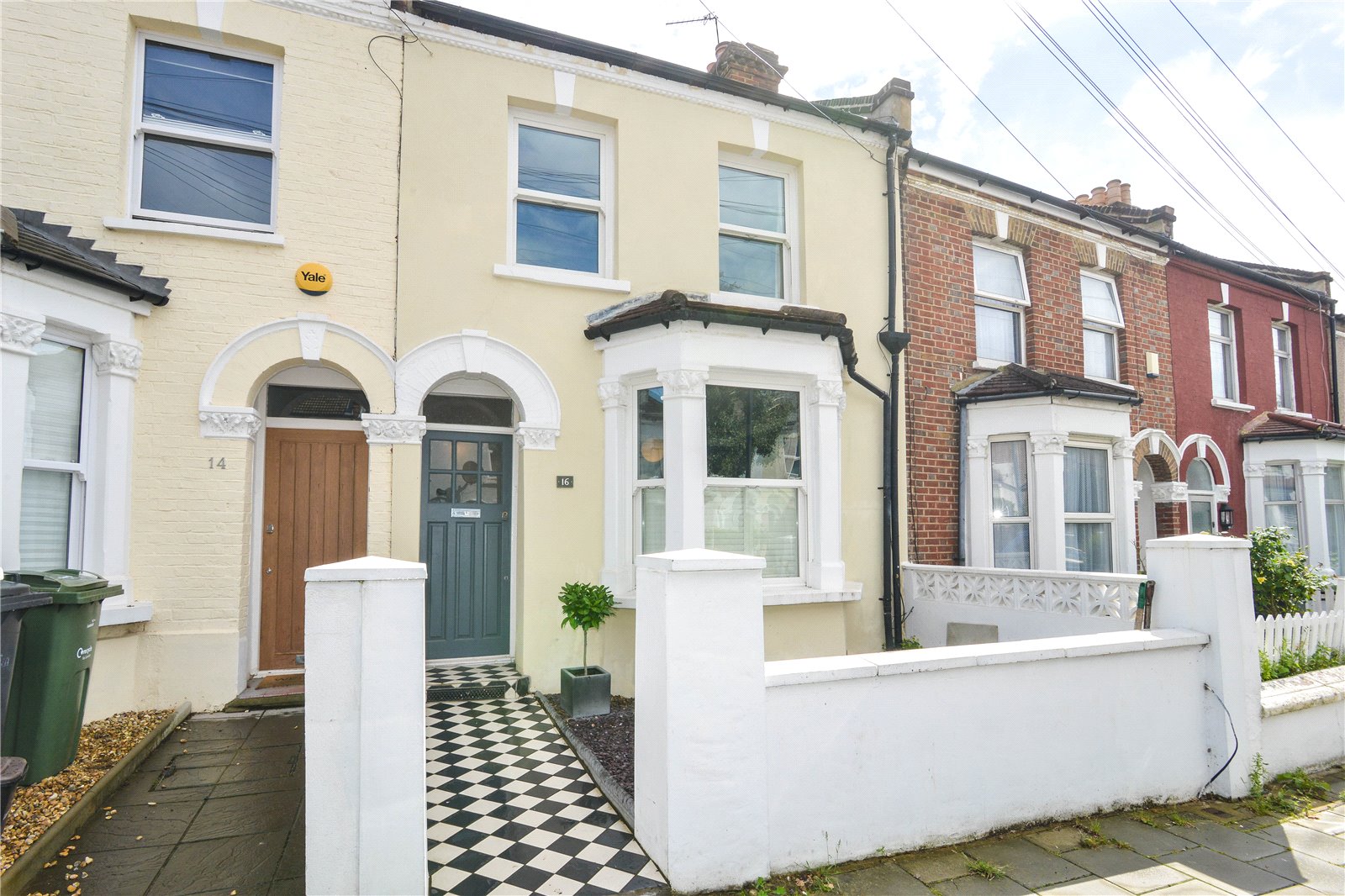 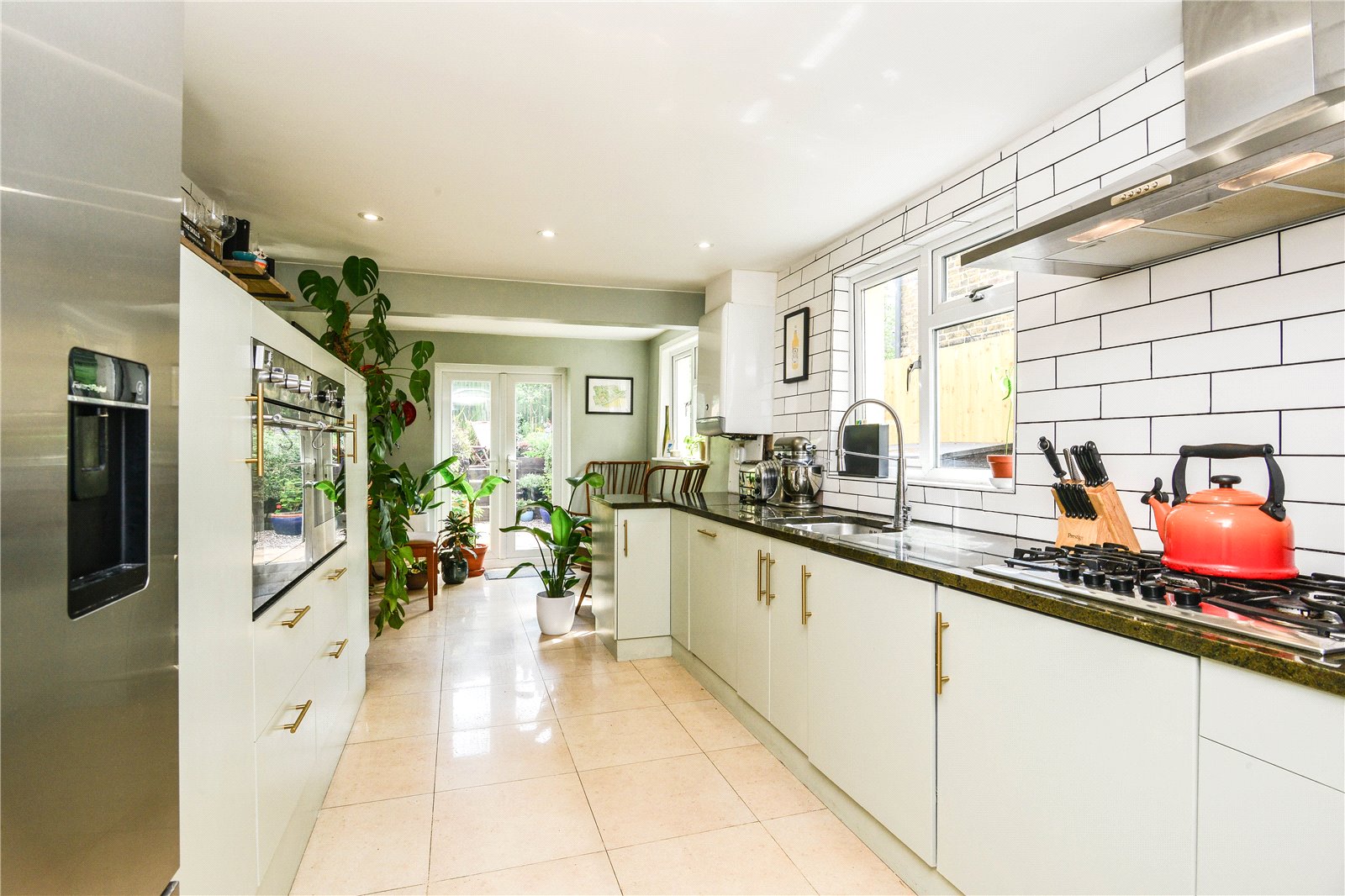 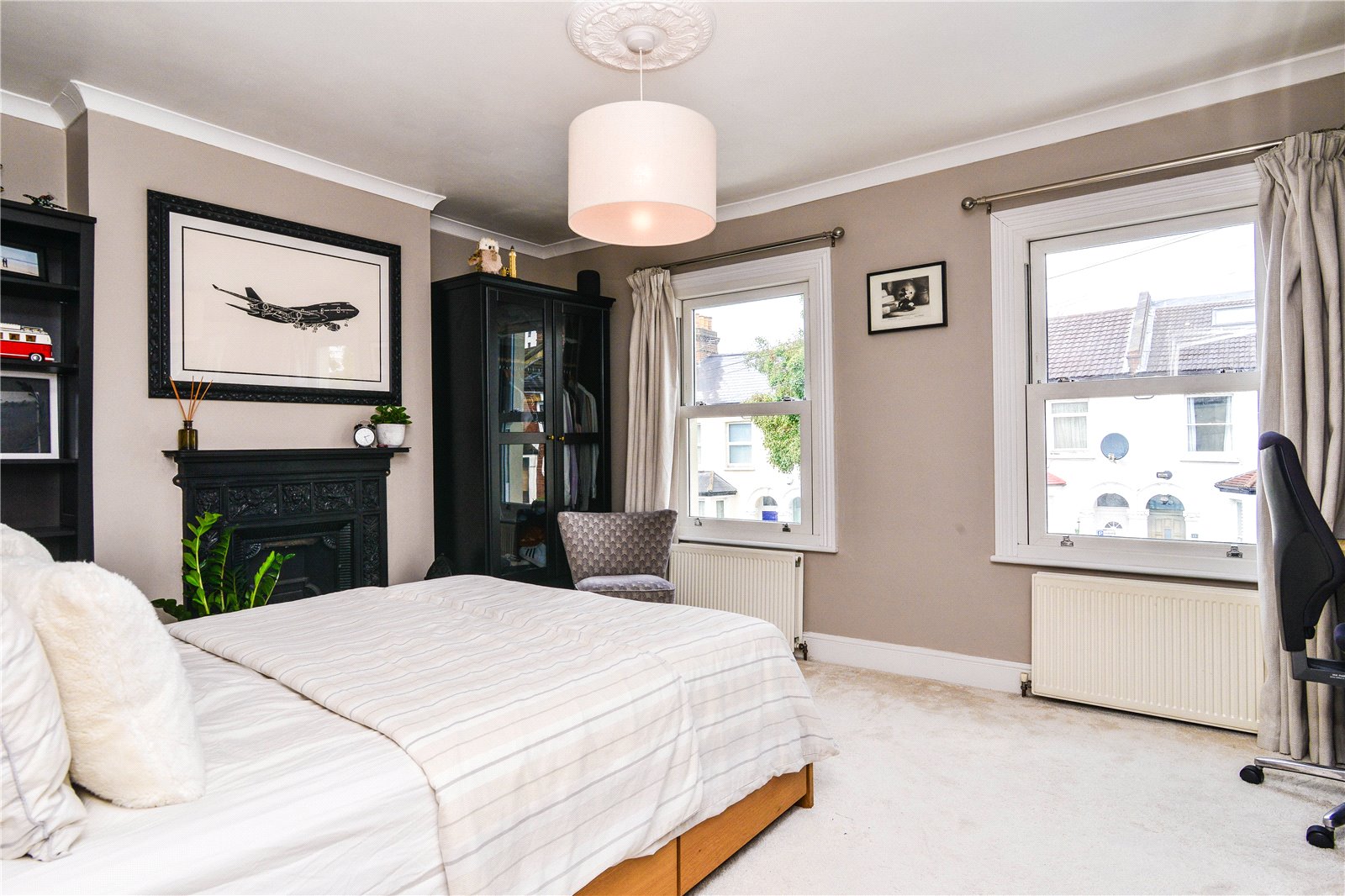 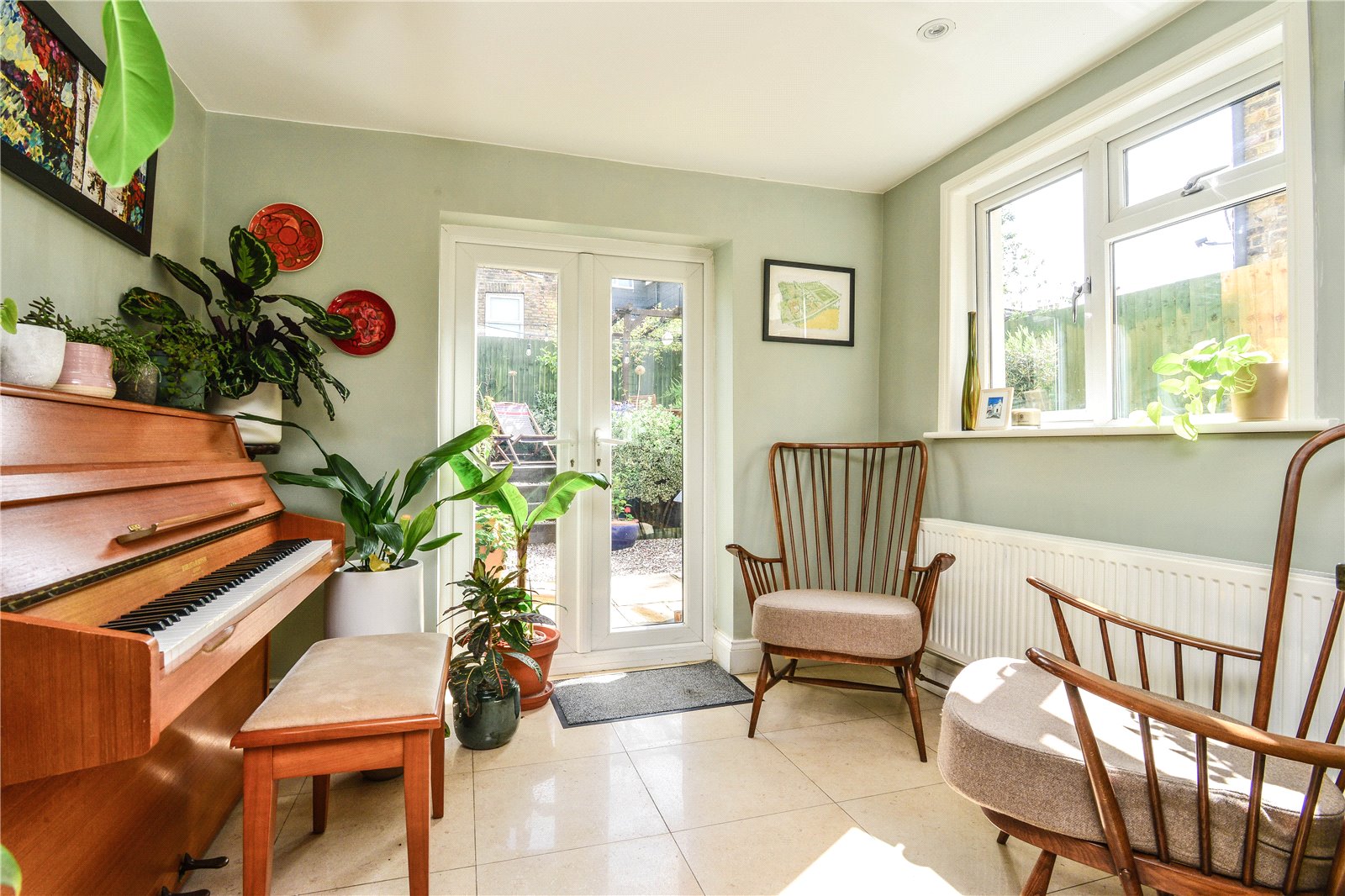 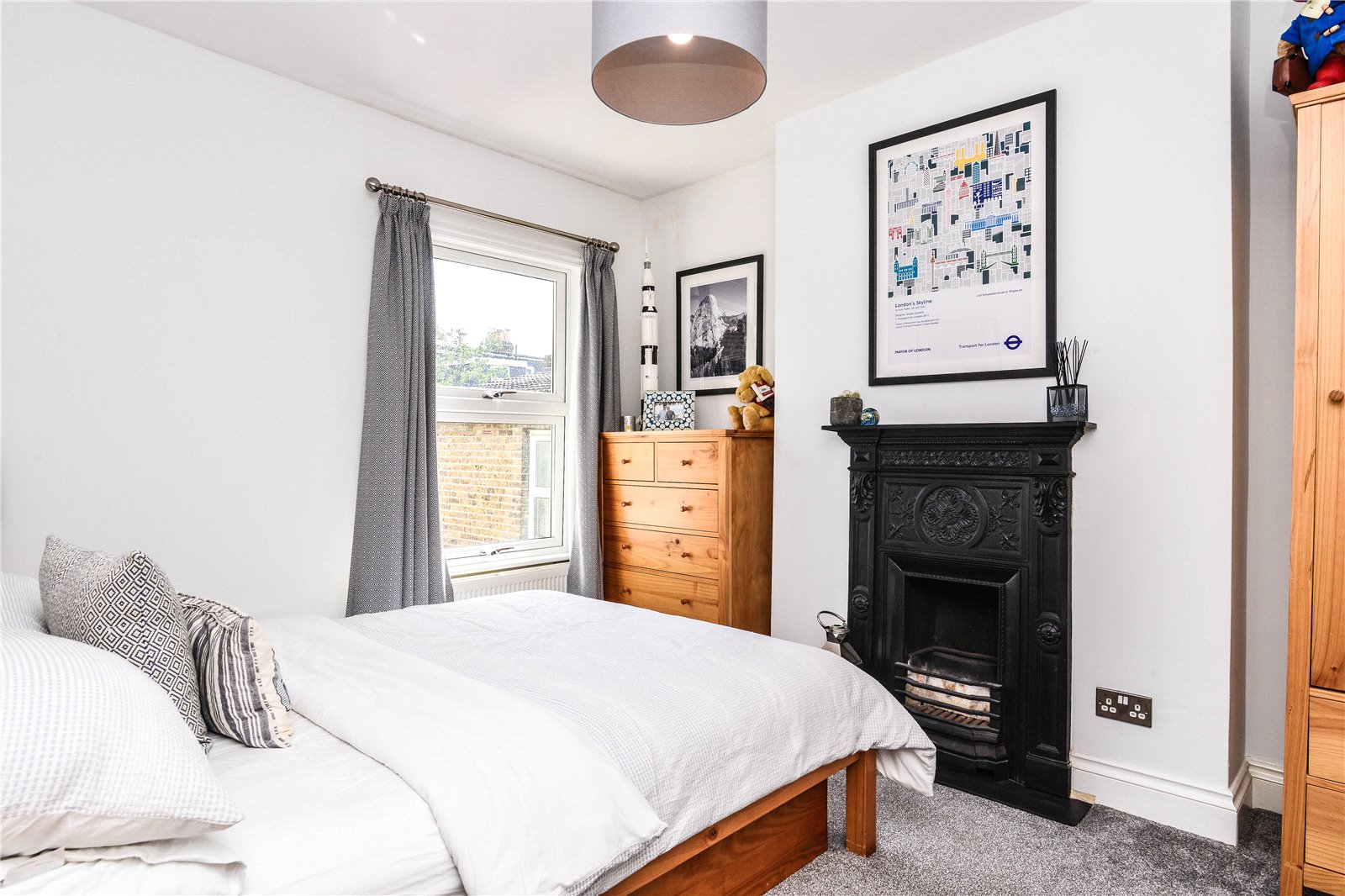 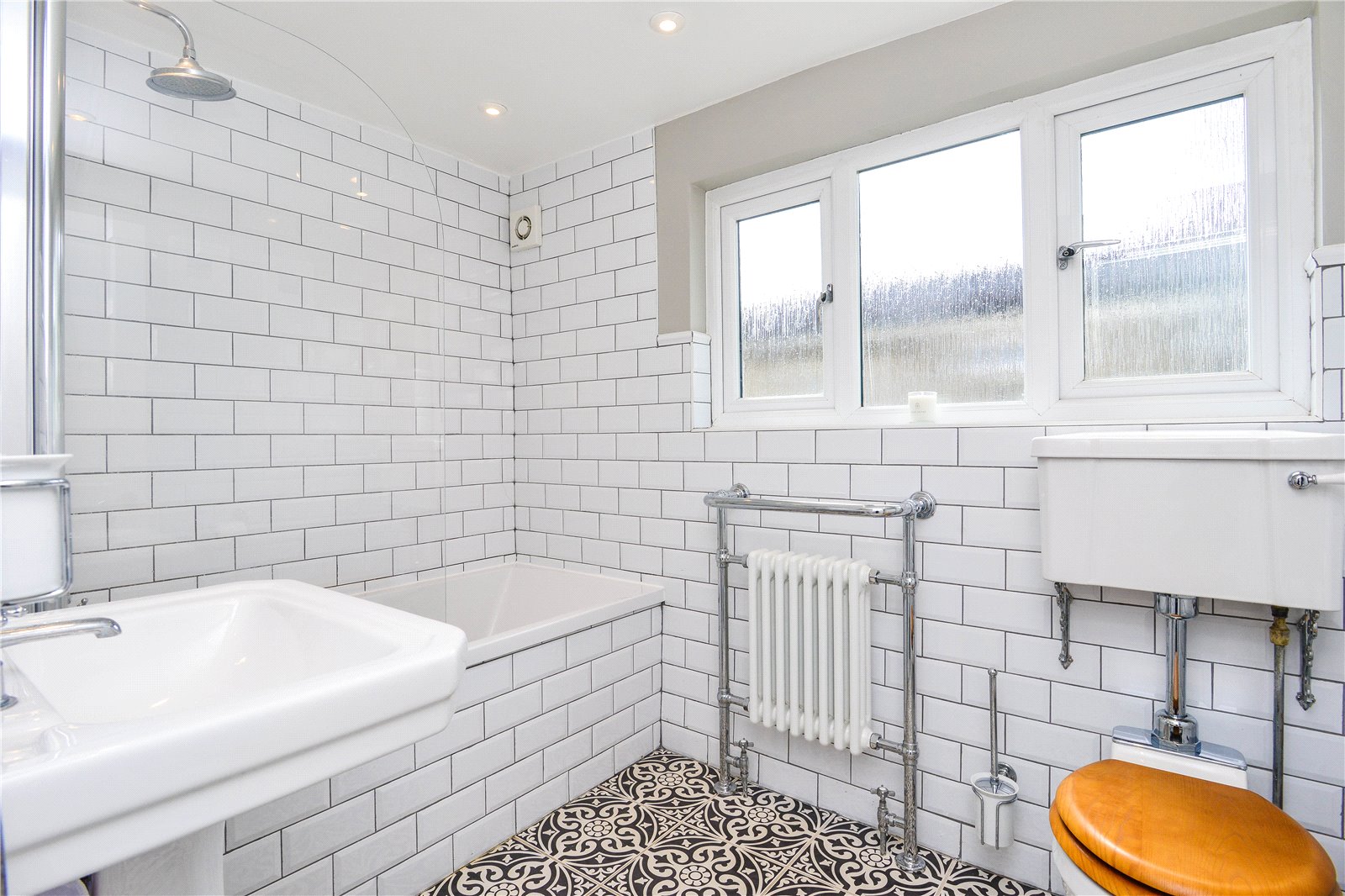 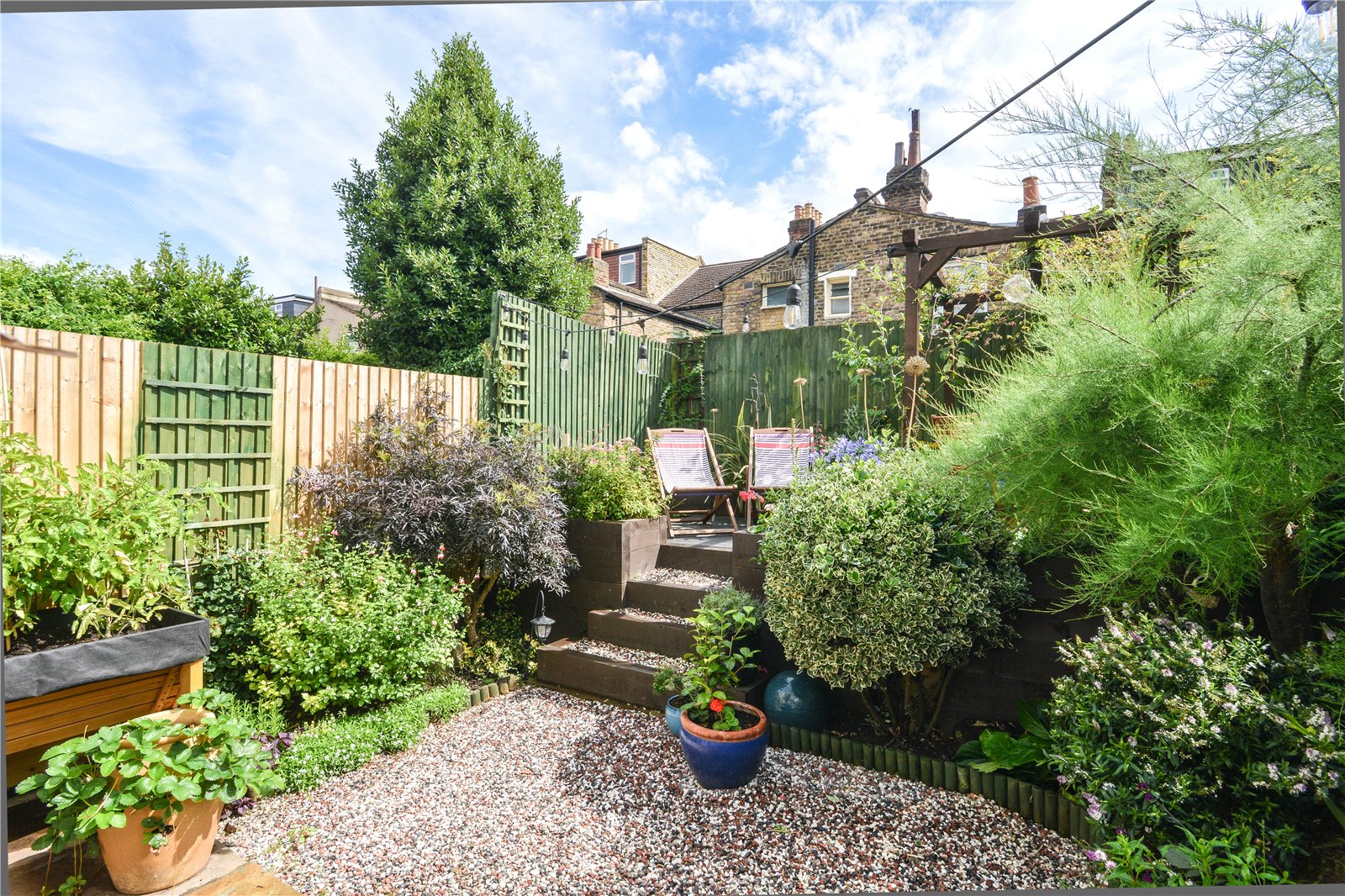 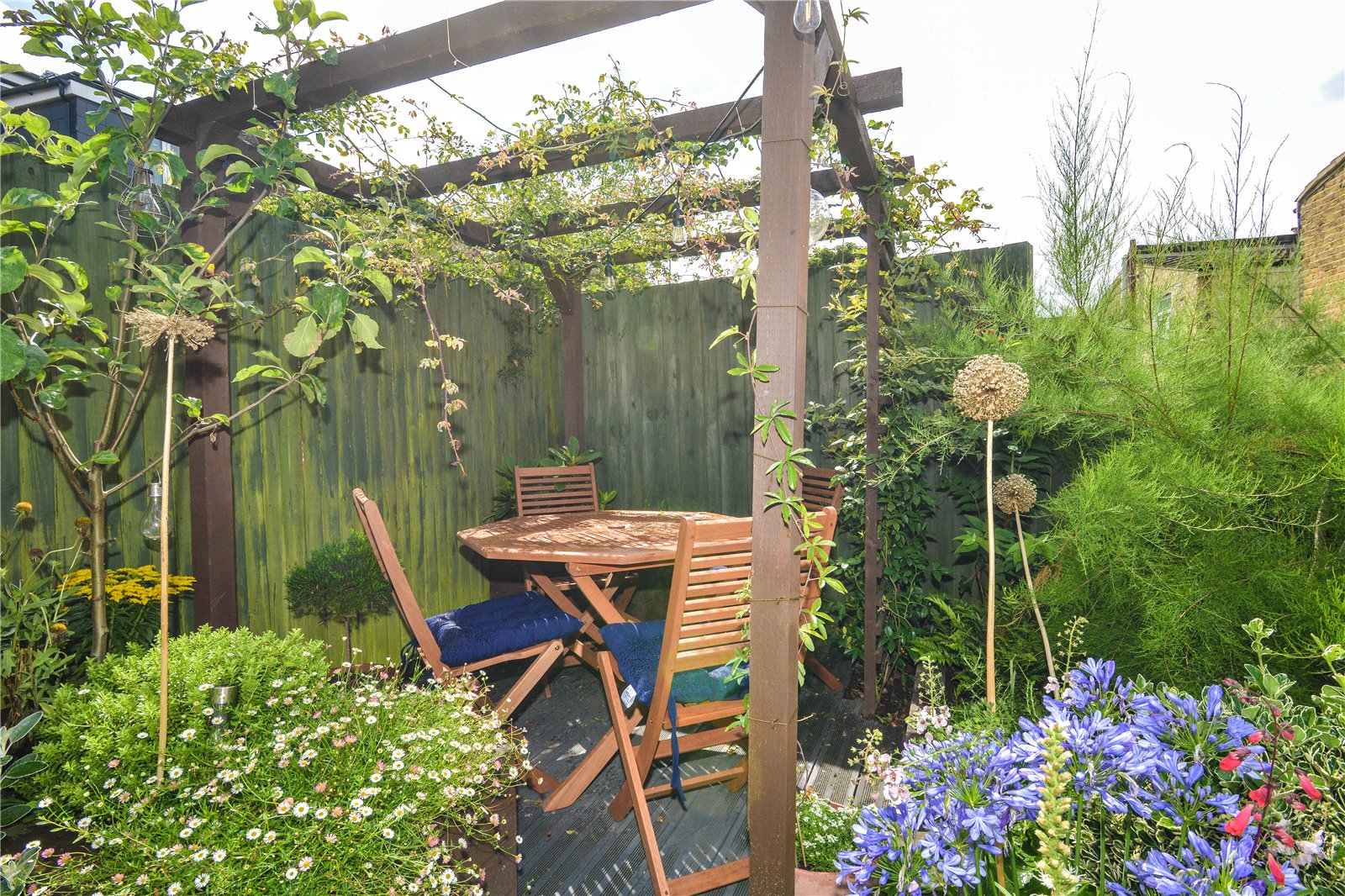 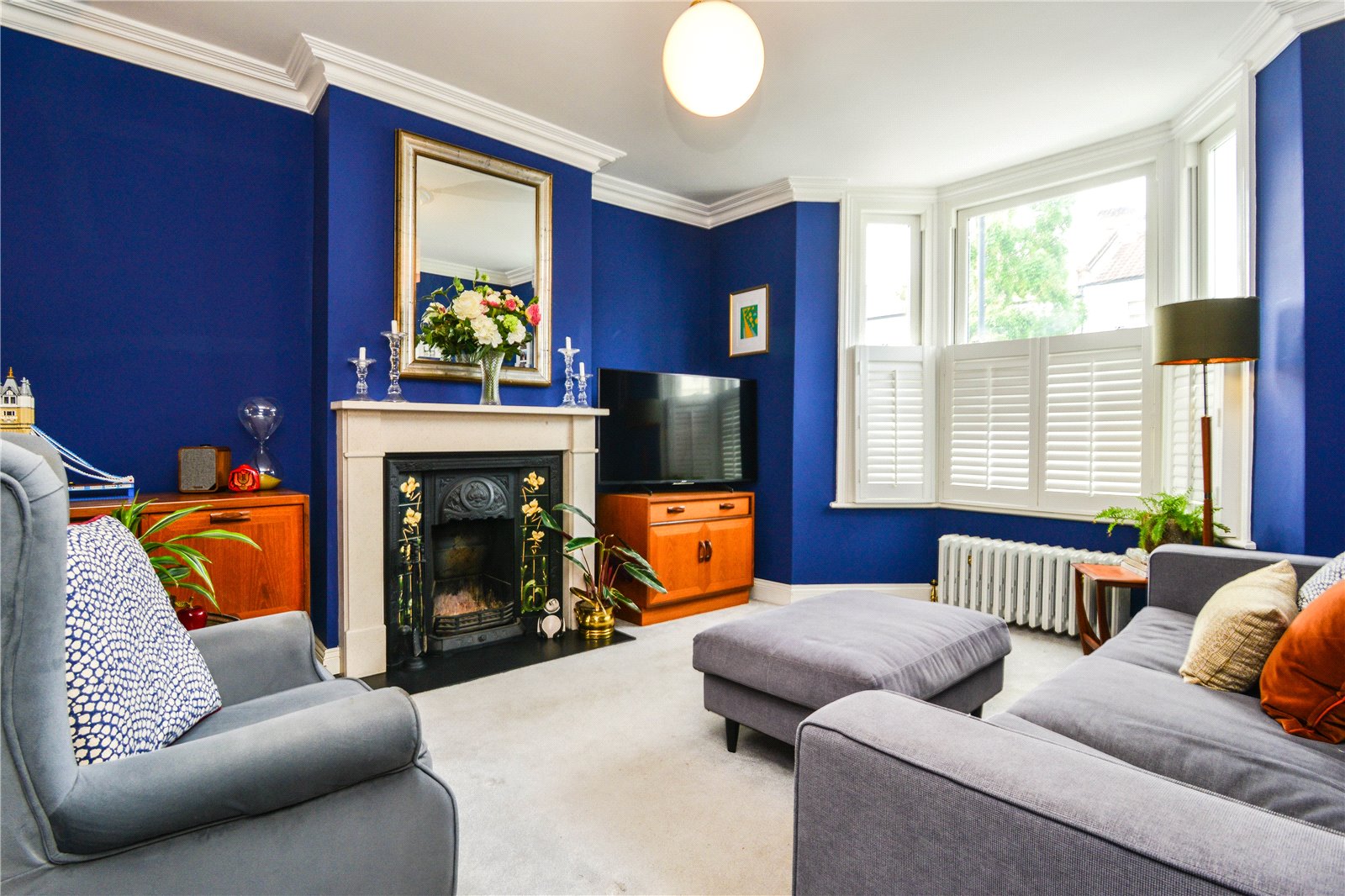 This handsome home is set behind has black and white tiles leading up to the front door. Behind the front door is a further tiled hallway with a double reception to your right before this 3-bedroom Victorian home opens into the eat in kitchen. The double reception room offer ample light with a bay window overlooking the front of the house and a single UPVC door leading to the garden. This deep blue coloured room with cornicing and a rose in the middle holding a ceiling light also has two fireplaces that have been restored to their original look. The fireplace closest to the window is currently working. Under the bay window sits a restored Victorian radiator. At the other end of the room is a space currently used as a dining area but could equally be used as a playroom / office.

Back into the hall and down a few steps you enter the eat in kitchen. To the left is a double oven cased with large cupboards surrounding it. To the right are ample floor and wall cupboards with white metro tiles behind and a window looking the side of the house. The worktop forms an L shape at the end to create a breakfast bar before opening out into a perfect space to put a kitchen table before you reach the double UPVC doors into the south-facing garden. As you head back to the hallway you will notice there is a door to the basement on the right offering a great space for storage and white goods.

Upstairs there are three bedrooms, all of which are doubles. Towards the rear of the house is the third bedroom with windows overlooking the garden. Next to this is the re-modelled bathroom with black and white tiled floor, towel heater and bath with shower over. Up a few stairs and you will find the 2nd bedroom, again large enough to fit a double bed and with useful alcoves which would be perfect for cupboards. This room also has the aesthetic benefit of housing a Victorian fireplace (not working). Next is the principal room with double UPVC windows overlooking the front of the house which once again has the very special feature of a Victorian fireplace with surround. (Not working).

The south facing garden has been carefully cultivated by its current owners to offer many spaces to be able to entertain and relax. Immediately outside is a patio area with mature herbaceous borders lined with painted old railway sleepers. Up a few steps and you enter a decking area to the left that is a definite sun trap, and opposite is a pergola that offers some useful shade in the height of summer.

Ferrers Road sits in the heart of what has become known locally as The Ferrers Triangle, offering residence very social living, particularly with a very sought-after pub at the top of the road – The Earl of Ferrers. To the west end of the street is a local café offering coffees / teas as well as hot and cold drinks. Beyond this, at the end of this street, you will find a very useful bank of shops to include hairdressers, newsagents, another well-renowned pub and as soon to be open new cheese deli under a block of flats currently under construction. Local shops are vitally important to the residence of Streatham with more and more opening all the time which goes to show the village nature of Streatham Common.

At the top end of the road is Streatham Common; A vast open area where you can walk with friends, sit and enjoy the sunshine or walk dogs. On the corner of the common sits another local café, The Rookery: sister to Skylark, offering hot and cold drinks, beers, pastries as well as hot and cold food. Beyond this is The Rookery that once housed a large family home. Behind here is Streatham’s very own brewery – Inkspot – where they regularly hold open days for residence to experience beer straight from the barrels.
Streatham is also well serviced by supermarkets to include a 24 hr Sainsbury’s, 24 Tesco, a Marks and Spencer food hall and Aldi.

Transport is equally in plentiful supply. This delightful three-bedroom mid terraced Victorian home is fortunate to sit between two very useful station: Streatham Common and Streatham. The former gives links to London Victoria, London Bridge as well as a line through Shepherd’s bush. Whilst the latter gives access to similar lines but with the addition of a line through Blackfriars and Farringdon. Next to Tesco’s is a large bus terminal that has regular buses into Brixton and beyond as well as buses into Green Park and The City. 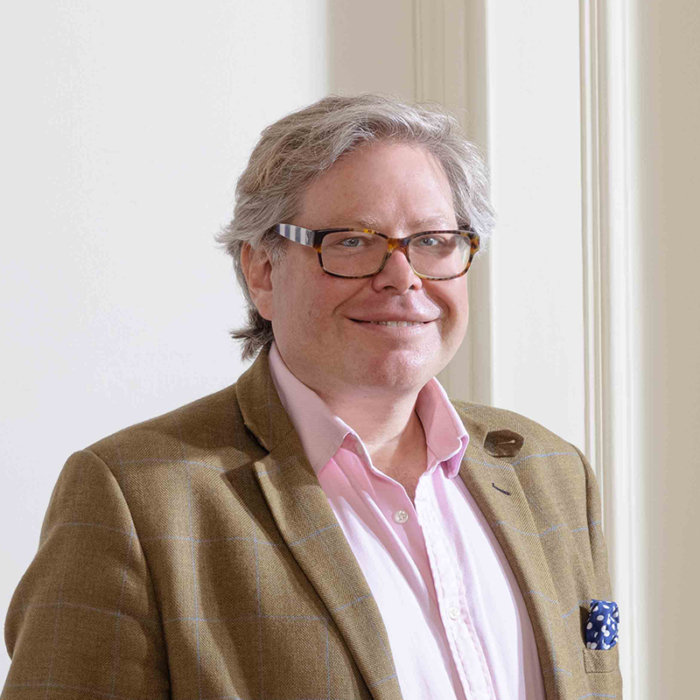